Love, a Dream, and a Theft

To understand, you need to know I grew up in a very small town in the 1960s. My mother was able to put me in first grade at age five, which should be kindergarten age but our school was so small we didn’t have a kindergarten. My older brother had Rosie Hicks in his fifth-grade class. The Hicks family were the only black kids in our school. He warned me that if I saw her walking down the hall and made eye contact, she’d slap me hard.

My first grade teacher, Miss Ragland, was large enough that her breasts almost served as a shelf on which to rest her chin. She was no-nonsense. I brought a red pencil to first grade because I was shocked when I found it in a store. I didn’t know any other color of pencil existed. As Miss Ragland spied me writing letters with it, she clomped over, yanked it out of my hand, and snapped it in two in front of me. “Red pencils are only for teachers!” she yelled.

All of my life I have been afraid of people taking away my things.

By fourth grade, I was a loner who read books. We had a small collection in our classroom and one day I picked up a book that was different from everything I’d read. It was magical. I could feel what was happening in the story. Somehow it made me realize that I could write a story people would want to read and it could be made into a book.

A couple of years passed, I was in middle school and life was worse. Incidentally I heard that the elementary school had received a grant to buy all new books. They were throwing out the old ones. Suddenly I remembered my book from fourth grade. All I could remember, though, was that it was about cave people and had a girl named White Cloud.

I went to the elementary school and asked Miss Ragland, now the principal, if I could go into the fourth-grade classroom and take one of the old books.

“They’re already gone!” she said. “The janitor took those north of town and threw them in the holler.” (Modern folk: this was country talk for “the hollow,” a trash dump outside of town where you took your trash and burned it.)

By then our small town had a library, so I asked the librarian about the book. She couldn’t find it. I had too little information. The internet would have made all this easy.

Over the years I thought about that magical book and the cave people, a young man and the woman named White Cloud. I gave up finding it. I could remember one image from the book, but it was no help. The man and White Cloud were running through the woods.

On this day, I skimmed the books. This was a newer branch in Kansas City I hadn’t visited before. Passing the spines, suddenly I saw an old book that drew out an ancient warmth.

I flipped through its pages. Then I saw this: 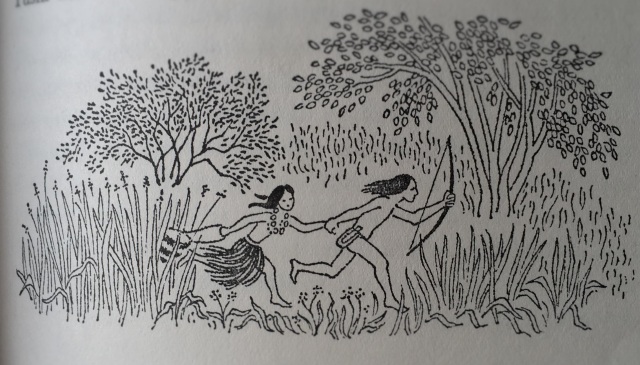 This was the book! It was Ishi, the Last of His Tribe, and it was not about cave people. It was about Native Americans. The woman was White Shell girl, not “White Cloud.”

I checked it out, read it instantly, then went back on the internet to find more about the author, Theodora Kroeber. The internet was young and even though I had paid a whopping $32 for the Prodigy software, I couldn’t find anything on her. So I went back to the library.

Astonishingly, she was Ursula K. LeGuin’s mother. I had just finished The Left Hand of Darkness by Le Guin and could not believe I stumbled onto such a talented, insightful family–in such a serendipitous way. What if I hadn’t gone to that library? What if I had decided to look for a grown-up book that day?

I worshipped Ishi. It was not only the story, it was my “life MacGuffin.” Everything that defined me sprang from reading this book in 1968.

Soon it was due at the library. I checked the paper card in front. Before me, it had not been checked out in seven years.

I had to have it. Scared to lie in person, I called and told them I’d lost the book and owed them for it.

I waited while they looked it up. Seven dollars, I was told.

What cheap relief. I happily paid it in person a few days later, pretend-apologized, and congratulated myself on being so smart.

The book has been read many times, getting more worn, my own Velveteen Rabbit. I’ve read everything I can find on Theodora. I know her daughter is more famous but I like Theodora better. The Ishi book rests in the most secure place in my home, a nightstand next to the bed that also holds my son’s ashes.

I still marvel at the fact that Theodora did not die until 1979. We had shared time together on this earth. But I didn’t know who she was in 1979; I was in college. The meeting was destined not to be. It was made impossible by a universe that wanted us to have a distant relationship.

This past January I mourned the death of Ursula K. LeGuin. I had written to her back in the day about her mother but did not hear back. Of course not: she was famous. I was just a fan.

I still love Theodora. I love how she writes. We share a love of anthropology. When she wrote about Ishi’s isolation and estrangement she predicted much of my own future.

Rosie never slapped me. I did see her in the hallway and she smiled at me.

I own red pencils now, dammit, and I won’t share them.

My remaining son has been told that when I’m gone, he must take and keep my copy of Ishi as long as he lives.

Sometimes stealing is a beautiful thing.

This site uses Akismet to reduce spam. Learn how your comment data is processed.