Throwing Out the Misdirection 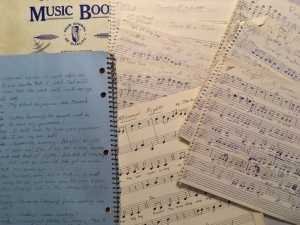 Original music of all kinds and a script for the TV show “Maude” – jeesh!

I am going to publicly embarrass myself.

I decided to be a writer in elementary school, and by the time I was in high school, I was prolific. There was no emotion or reality in my fiction, though. Being a loner, it was easy to spend lots of time writing. I created worlds far from my own. As a teenager, I wrote about teenagers. But not teenagers like me. My characters were wild, drove fast cars, drank booze, and took drugs.

Here’s what is even more embarrassing, though: as I grew older and moved from place to place, I kept a couple of boxes of my “early writings,” dragging them with me. I didn’t go back to read them. They were my origin story. I kept thinking, once I become very popular, these will be a “valuable contribution” to some university’s collection.

I should have read the pieces. They are misshapen, badly flawed, wrong lengths (a 24-page novel, a 30-page screenplay) and straight-up stupid. A character does not run wildly down the street, screaming, “Somebody shoot me up with some dope! I need my dope!” A 13-year-old in school does not shout at the teacher, “Give me some booze! I need my booze!” It was like I was writing while on an acid trip about teenagers having acid trips. It was like a new show called ABC Afterschool Special Gone Wild. Of course I was influenced by Linda Blair’s TV movies, Born Innocent and Sarah T: Portrait of a Teenage Alcoholic. I dreamed of writing such dreck! (You won’t find those titles among Golden Globe or Emmy winners.)

There is a sadness to these youthful writings. They are not all stories. Some are poems, plays, and even songs, because I could read music and composed it. I started a full orchestra arrangement of the song “Tears of a Clown” by Smokey Robinson and the Miracles. I drew some of my characters. I drafted the layout of their houses. I drew maps of the towns where they lived. I made “newspapers” on notebook paper reporting on their happenings.

There is a solitude to these pieces, though. When I think of the accoutrement of the stories I wrote–the maps, portraits, home architectural designs–I remember living in these dream worlds where I was G-d, creating people, their actions and futures. It was so different than my own pitiful life at the time: being a misfit, being mistreated, stuck in a rural town with a lot of small minds. No wonder I wanted to escape.

Later, I actually did. And I am grateful I had the chance to “escape” to my mind during  those tough years. I’m thankful I had the inventiveness to write, to live in other “worlds” of my own making for comfort.

But I no longer needed them.

It’s hard to admit I was saving these writings because I thought someday, people would want to read every word I’ve written–unpublished pieces, horrible first drafts, stupid childhood stuff. Who wants that? No one.

This week I burned all the whole pile: drug stories, half-baked tunes, never-gonna-make-it teenage screenplays, and all the other crap from those early years. I do not need those boxes and burdens. I feel lighter.

Thank you, early writing, for being my escape when I needed it.

Thank you, self, for finding your path.

And I thank myself now, for having the maturity to understand I write not only for me, but for you. That is what makes true success.

P.S. I did save my story, The Tragedy of Anthony Mastona (the tragedy was drug use, of course; he went, in a week’s time, from trying a joint at a party to daily multi-heroin doses). I still need to have something to laugh at.

Author of middle-grade fiction. Former writer for men's fitness magazines. Book "The Owl Motel: And Other Places Where You Are Not Welcome" available on Amazon. Avid cook and gardener.
View all posts by Chuck Mall →
This entry was posted in fiction, Words, writing, Writing Angst and tagged #kidlit, #lit, #writers, #writing, amwriting, books. Bookmark the permalink.

1 Response to Throwing Out the Misdirection

This site uses Akismet to reduce spam. Learn how your comment data is processed.